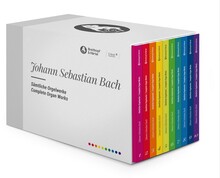 This new edition of Bachs organ music is intended for performance purposes and is based on the current state of Bach research. The findings of the previously published text-critical editions have been taken into consideration but not rendered in their entirety.

The edition contains
 the works listed in the BWV (Kleine Ausgabe 1998) as organ works (BWV 525771) as well as organ works contained in the Appendix, inasmuch as their inclusion is justified by the current discourse on authenticity.
 works listed in the BWV as keyboard works but for which the use of the pedal is prescribed in the sources or mandatory for technical reasons; also the four Duetti printed in Part III of the Clavierübung.

Works of dubious authenticity (Incerta) are included whenever present-day research makes them appear sufficiently plausible. Dubious works for which Bachs authorship cannot be excluded for text-critical reasons, along with early and alternative versions of works, are contained at the website www.breitkopf.com/bach-edirom. In addition to presenting the musical text with comments, this online version allows synoptic depictions and a cogent search process for specific measures, thus providing a better and faster overview than would be possible with a printed version. The alternative versions and Incerta featured online can also be printed out.

If a work is transmitted in several authentic versions, then all versions are reproduced, inasmuch as the difference between them is substantial. Here the latest version (main version) of a work is given first, and is followed by the earlier version(s), provided that the chronology is ascertainable.

Incomplete works and pieces transmitted in fragmentary form are treated as finished compositions; they are generally left incomplete.

In addition to the music, each volume contains an introduction and comments. The introduction provides information on the works which reflects the current state of scholarly research (position in Bachs oeuvre, work history, transmission, authenticity, occasionally notes on performance practice). The comments contain a description and evaluation of the sources, and account for editorial decisions in matters of determining the form of the music text. Readings which Bach rejected through autograph corrections are not generally communicated. The purpose of the edition, which aims above all to serve musical practice, entails a restriction of the source descriptions.

The edition reproduces the music text as transmitted in the sources (original prints, autographs, copies), but also takes into consideration notational practices that are customary today. We have, for example, kept the Dorian notation (D minor without accidental, G minor with one b) that is found especially in the early works.

Only the treble and bass clefs have been used. Works in which the pedal has its own proper part to play (the bass, in general), and in which there is absolutely no doubt about its distinct function, are notated with their own pedal staff, even if only two staves were used in the source. There are a few exceptions concerning passages with a very simple pedal part (e.g., pedal points), where it seemed better to print the music on two staves.

Work titles taken from autographs or original prints are as a rule reproduced in their original orthography; the correction of obvious errors has been treated on an individual basis. The titles transmitted solely in copies were standardized; the original reading can always be inferred from the comments.

Additions of performance instructions and articulation signs that are clearly missing in the source are signalized by the customary graphic solutions (broken lines for slurs, small type for performance markings and accidentals, brackets for grace notes). Cautionary accidentals are supplemented on the basis of how necessary they are; they are not identified as such.

Wiesbaden, Spring 2010 The Editorial Board