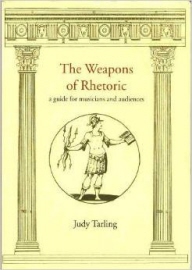 Tarling. The weapons of Rhetoric.

A guide for musicians and audiences.

Judy Tarling's second book strikes at the heart of musical performance with a study of the relationship between music and rhetoric, which was much remarked upon during the Renaissance and Baroque periods. Revised edition 2013 now with enlarged index and references.

Comparisons between oratory and the performance of music are to be found from the beginning of the 16th century and continue until the late 18th century. Thomas Mace (1676) asks the musician to show as much wit and variety as an orator. Geminiani (1751) compares all good music to a discourse, and recommends that the musician should use the same effects as an orator. Quantz (1752) requires the musician to use the skills of an orator to become the master of the hearts of his listeners.The absence of further detail implies that the musicians of the day knew what this meant in practice.

Using the works of the classical rhetoricians Cicero and Quintilian as a framework for the book, their ideas are traced through the Tudor classroom and popular Renaissance eloquence books through to the late 18th century. Concentrating on performance techniques that aid communication of musical ideas to an audience, historical source material is used to demonstrate how to hold the attention of the listener and at the same time move and delight him, as in the classical oration. Quotations from the rhetoric manuals, Shakespeare and the Bible are complemented by over one hundred musical examples, drawn mainly from the 17th and 18th centuries, which illustrate the connection between speaking and playing in the rhetorical style.