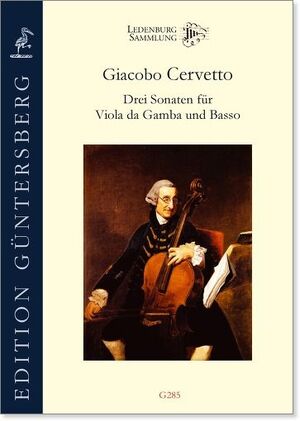 These three solo sonatas for viola da gamba and basso are a part of the Ledenburg Collection. They are contemporary transcriptions of well known cello sonatas that sound very good on the viol. The composer, Giacobo Cervetto numbered among a group of London-based Italians who popularized the violoncello as a solo instrument in England. The Ledenburg Collection in Osnabrück was discovered only in 2015. It contains primarily viol music from the time around 1750. The most important works in the collection are the twelve Fantasias for Viola da Gamba Solo by Georg Philipp Telemann, which were long thought to have been lost.

2 full scores, one of them with realization, 2 parts